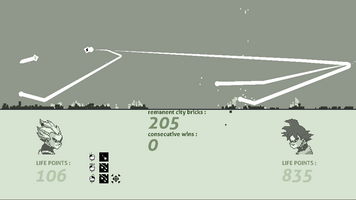 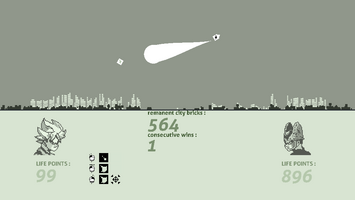 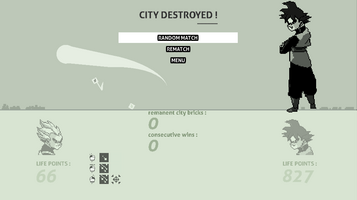 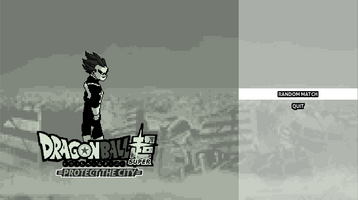 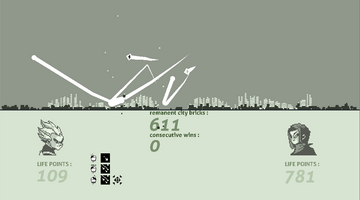 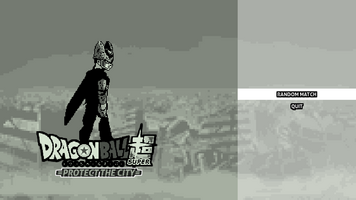 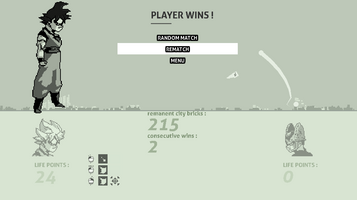 Another push today. Many little things bothered me, I had to fixed a few issues.

There was a little glitch within battles that finally got on my nerves. The Right-Click is the Ultimate Attack of your character. Very handy but you may regret it if you spam it : it costs you 5 Life Points per use ! The problem was, in the previous version, if you had your Life Points below 0, the only way for you to lose was the complete destruction of the city... yes... I didn't pay enough attention and you were allowed to lose life points using the Ultimate Attack... making you invincible if your score attempted the negative numbers...!!

After having punished me for this intolerable mistake, I fixed that with a new feature. Really DBZ-ish : you don't lose anymore LP under 5. In this way you can spam the ultimate if you wish but you may not survive the next blow anyway...!! This is the shonen spirit after all, unleashing all you've got if you're cornered.

Yes, sounds! I tried to convert some of Kikuchi tracks from the original TV series... well... don't do that at home (at least not the way I did). It's more or less viable for the time being, but I won't leave this so creepy. I am aware that it is creepy, you must think 'So WHY did you do that??'. Well, tastes maybe. I like them the way they are...

But I would understand if you mute the tab after listenning!